I promised I wouldn’t write a novel before I post recipes, so I will spare you the details of my day. Let’s just say it’s been 7 months of snow and we are ready for spring! But snow drifts, sniffle,s and sore throats are still a reality on this lovely April day. Here comes the homemade chicken noodle soup, made easy by the world’s  most popular current kitchen trend. This is my first “Recipe For People Who Hate Recipes” (RFPWHR??) so enjoy the mess!

Shred meat from a rotisserie chicken and throw it in your instant pot.

Dice a carrot or two and about half an onion. Throw in some frozen peas. Obviously, you can add other vegetables. I can’t stand celery so that doesn’t go in mine.

LOTS of garlic. Salt, Pepper. A handful of RAW pasta broken into thirds.

Broth to cover everything and more. I used like 2 mason jars full of bone broth I made from a previous Costco chicken carcass.

Seal the IP. Set for 8 minutes. Quick Release when finished.

Done and done! I could have lied in the title and say it only takes 8 minutes, like most IP recipes, but let’s be honest, it’s more like 15. 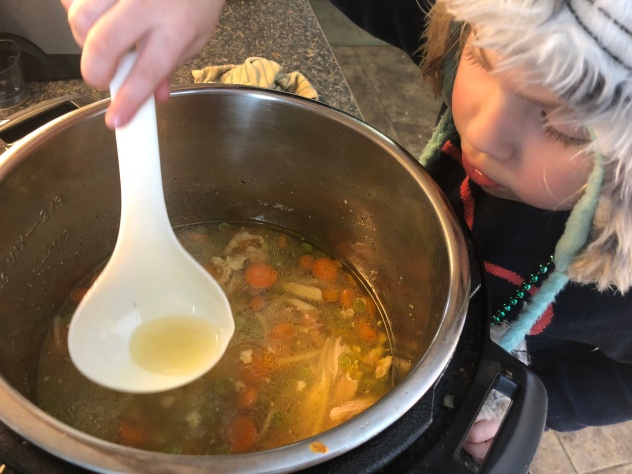 When I cook, I like to throw everything together and taste as I go, so recipes generally annoy me. Hopefully, these blog posts will be helpful for people who think the same way as me! General ideas, but not RULES. 😉 Hopefully I’ll be posting some warmer weather recipes soon.